The bill was passed on a bipartisan basis and is intended to speed up infrastructure projects all over the country, such as replacing or modernizing old or obsolete infrastructure, including road, rail, and water projects.  In addition, the bill will help support new and improved broadband, electric vehicle, coastal protection, flood mitigation, and other critical systems.

In review of our infrastructure bill analysis, about half a billion dollars will be earmarked for new or enhanced programs, with a little more than half of that allocated to transportation.  The balance of that half a billion dollars will be given to water, broadband, energy, power, and other sectors.  The remaining amount will be used to fund existing transportation and water programs.

Under the Infrastructure Investment and Jobs Act, there are several new and enhanced programs listed. 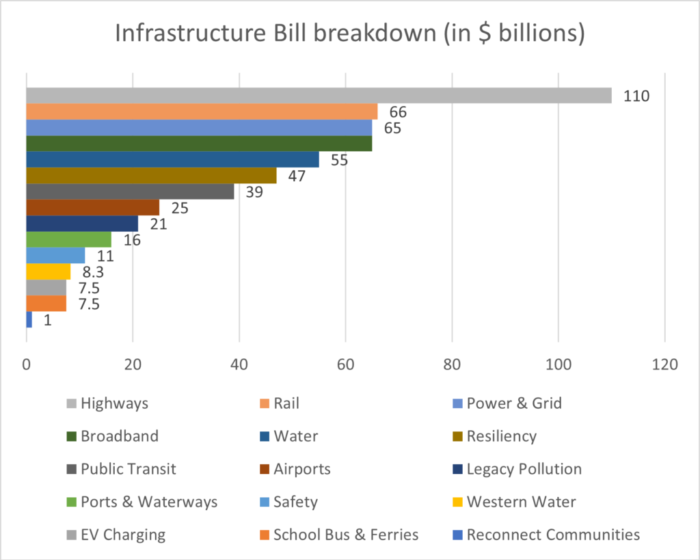 With regard to highways, the bill provides for reauthorizing and providing supplemental funding for existing highway programs. It also provides for $110 billion of new funding, including $40 billion to repair and replace the national backlog of deficient and outdated bridges. Additionally, it provides $66 billion in new funding to help eliminate Amtrak’s maintenance backlog, modernize and improve their Northeast Corridor, and invest in new rail corridors, including Amtrak’s priority corridors. About $39 billion will be to help address a need for more than 24,000 buses, 5,000 rail cars, and 200 stations, along with thousands of miles of track, signals, and power systems. It will also advance major new transit corridor projects.

In other areas, the bill provides $65 billion in new funding for broadband deployment in under-served parts of the country, including rural areas and tribal lands. It will also make broadband access more affordable for low-income families. There will be $20 billion in new funding for airports, including $15 billion for the Airport Improvement Program, which invests in runways, gates, and taxiways. The remaining $5 billion will be for a new program aiming to help advance airport terminal projects.

For the water industry, the bill provides $16.6 billion of new funding for coastal infrastructure projects, inland waterway improvements, port infrastructure, land ports of entry, and U.S. Army Corps of Engineers harbor and waterway construction priorities. An additional $23.4 billion will be for drinking water and wastewater programs, and $15 billion is provided for new funding to replace lead pipes, with $10 billion in new funding to treat and remove dangerous chemical substances.

The bill includes $65 billion in funding for grid reliability and resiliency, critical minerals, and supply chains for clean energy technology, transmission projects, and other energy efficiency and critical energy projects. There will be $47.2 billion in new funding for cybersecurity and other infrastructure needs such as waste management, flood and wildfire mitigation, drought, coastal resiliency, ecosystem restoration, heat stress, and weatherization. Finally, the bill provides $7.5 billion to help develop a national network of electric vehicle charging infrastructure, and to encourage the use of alternative fuels and non-fossil fuel vehicles.

Much of the bill’s funding will be allocated through formula grant programs. This means that states will receive a percentage of the funds available so that there is an equitable and effective distribution of the funding. Other programs are discretionary grant programs, and applications for funding will be solicited by federal agencies and evaluated based on criteria that Congress has identified in the bill. One of the benefits of the formula funds is that they are allocated quickly to the state and local governments. Discretionary funds will take longer to reach those governments, but they allow the federal government to target investments to projects that promise to provide great benefit to the country, such as multi-state and other large and complex projects.

The bill continues to support several federal loan programs such as the Transportation Infrastructure Finance and Innovation Act, the Water Infrastructure Finance and Innovation Act, and the Railroad Rehabilitation and Improvement Financing program. Additionally, it includes tax and regulatory provisions that could help speed up major projects. It will double the national cap on Private Activity Bonds, which will allow public infrastructure projects developed by the private sector to benefit from a federal tax exemption.

Several provisions in the bill will encourage state and local officials to leverage the federal investment in order to attract public and private co-investment. Also, the bill requires that non-federal funds be used alongside federal funds for each project. It also encourages public-private partnerships, and state and local governments will be eligible for grants to help officials explore them.

The funding provided by the bill will be made available for the next five years. This will allow state and local governments to maximize the number of projects in their plans by matching the new federal funds with other funding, including state, local, and private investments. The public funds are federal, state, and local funds used to pay for part of a project’s cost during construction. User fees such as tolls, fares, and charges will be collected and used as dedicated sources of revenue to pay for project costs. Also, equity investments from infrastructure funds, pension funds, and developers will be used and then repaid with public funds or user fees. Debt financing will be provided by banks, capital markets, and institutional lenders, and will also be repaid with public funds or user fees. Finally, low-cost and flexible loans provided by federal loan programs will also be used to finance the projects.

The bill provides a substantial new source of public funds, and these can be allocated toward the costs of the projects or to repay financings. These investments will make even more projects financeable, and they will facilitate more projects moving forward with private investment.

Trevor Saliba is the founding Managing Partner of NMS Consulting, a global management consulting and strategic advisory firm based in the firm’s Beverly Hills office where he serves a global client base. Mr. Saliba is also Chairman & CEO of NMS Capital Group, a global focused venture capital and private equity investment firm with investments across multiple asset classes including real estate, financial and business services, infrastructure and energy, consumer products, technology and media.

Jay Purcell is a seasoned executive with more than thirty-years’ experience in the energy and technology sectors having held senior positions at a Fortune 200 company, The Gas Company and Constellation Energy Inc. In addition, he was a member of Governor Schwarzenegger’s trade delegation to Mexico in 2006. Over his career, he has been involved in more than $3 billion of transactions, including annual P&L responsibility for more than $300 million.

Mr. Mansourian served as Vice President while at NMS Capital Advisors, when the company achieved cumulative sales growth of over 5,100% with annual compounded sales growth in excess of 120% from 2012 to 2017. 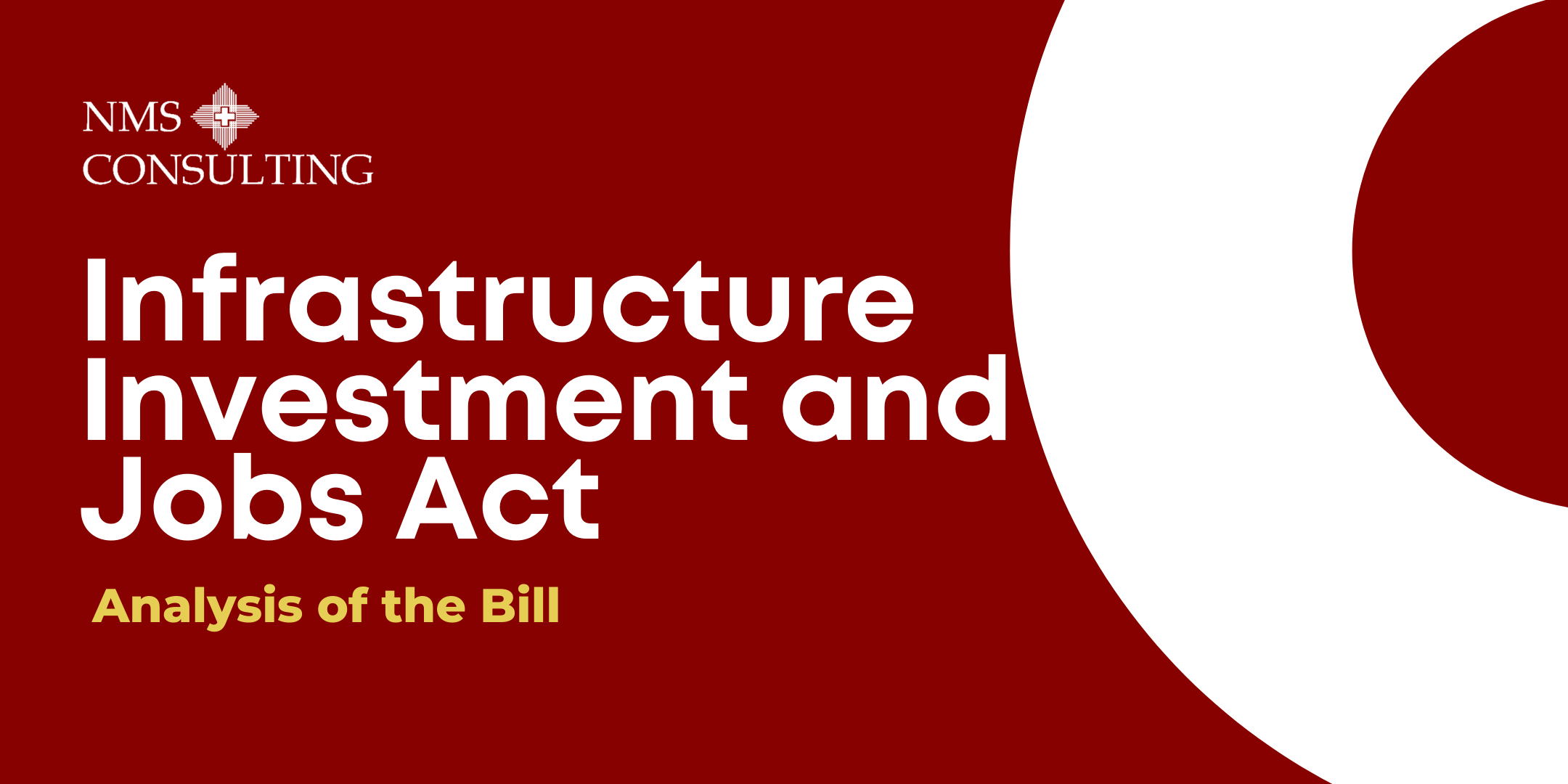