The landscape of media has undergone a massive change.  The days of Burbank and Hollywood studios with a main goal of having a blockbuster regardless of the expense are no longer.  This kind of all or nothing mentality led to major changes in movie production technology and ingenuity.  Companies began to plan differently, with a focus on bringing in actors and actresses that will get the movie sold while still leaving room for profits.  This same strategy was seen in television, beginning with the enormous salaries paid to the actors on Friends.  That was the trend setting moment, which led to meteoric rises in budgets as producers look to outdo the latest high cost movie or show with bigger and bigger investments.

Then another massive change was seen – the digital era.  Netflix became the new Blockbuster Video and never looked back.  Due to the immense popularity and low costs of streaming shows and events, Netflix and other digital streaming players are able to make monumental investments while still retaining a profit.  This year, it is expected that Netflix will be spending roughly $15 billion on content and recently issued an additional $2 billion in debt to help cover the cost.1

To combat this, traditional companies are having to think outside the box.  One strategy has been mergers and acquisitions in order to consolidate, but also to increase their content availability.  These traditional companies, have come to find that there is no beating Netflix and the like, so they have decided to join and launch their own streaming platforms and services.  These direct-to-consumer TV services are now growing rapidly, as can be seen in the figure below.2 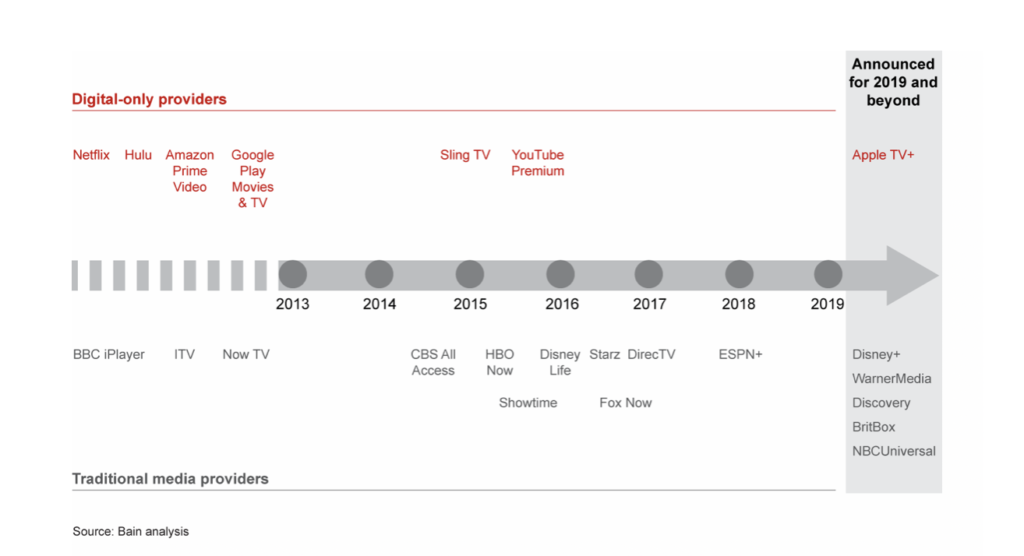 Other measures traditional companies have been taking include investing in analytics to ensure their money is spent most efficiently, especially since these companies have had to ramp up their spending to compete with the digital giants.  Case in point, Accenture research in 2018 indicated that 81% of media executives feel they are likely to exceed the annual Opex budget, while also experiencing a 10% decline in EBITDA.3

For traditional companies looking for a strategy going forward, it really must start at the top with all the C-level executives.  The company mission and goal must be made clear to everyone in the organization – catching up to the digital giants will take some belt-tightening and brown bag lunches.  Sacrifices will be needed, but the outcome of a digitally transformed organization would reap immense rewards.  The cost-cutting must be done methodically, as not all costs are the same.  Costs regarding content or production should not be cut drastically, while administrative, travel, and other such costs can be slashed.  Cost-cutting will have direct benefits, as can be seen in the figure below.2

These companies will need to be laser-focused on what will help them the most, starting with content.  In this media age, content is king, and the way to approach content spending has drastically changed in recent years.  In the past, studios would temper their spending on any single show and wait for results before investing further.  In today’s crowded market of streaming entertainment, spending a fortune on content in a bidding war is necessary, even before a company is able to “test the waters” with a pilot.

Of course, cutting costs wisely and efficiently is no easy task.  It is important that the frugal mentality is picked up by everyone and efforts should be led directly by the top financial individuals at the company.  This cannot be a project for only mid-level management, as it needs to be embraced by everyone, especially the brass.  Furthermore, the financial efforts must also be combined with a team of content experts, as these individuals will be the ones who can identify the path to growth along with the cutting of costs.  By embracing this mentality, the creative team will not be seen as having their budgets cut and having something taken away from them, but rather, they will be seen as the ones being relied upon for leadership and guidance.  Companies should consider the best ways to drive this home and reward employees, such as having incentives tied directly to cost-cutting milestones.

Traditional media companies have also renewed their focus on analytics and technology, specifically around distribution, marketing, and content.  The driving force is the ability to evaluate the best content, along with additional revenue streams.  Furthermore, these companies need to simplify their operations and streamline to squeeze out all possible efficiencies.  As the streamlining of operations takes effect, a shift in culture should also occur as the employees are guided towards thinking more like employers.  Once a few employees embrace the mentality, it becomes contagious and absorbed quickly by the laggards.  It is then incumbent on leadership to use these saved funds wisely and reinvest to promote growth.  Content creation should take front seat, and acquisitions should be considered if they provide a quick and cost-efficient route towards content.  Reinvestments should also be made into strengthening the company culture and showing the company’s personnel the spoils of cost-efficiency.  In this new digital age, the focus must be on price efficiency, culture change, and the new king – content.

Why SPACs Have Become A Popular Way to IPO

Webinar Recording – What Makes a Good Leader in Uncertain Times?

What is the Future of Virtual Events?